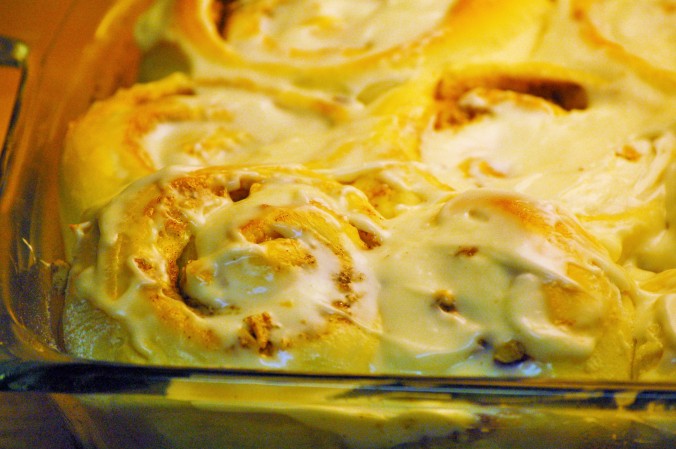 I LOVE a good cinnamon roll. I am always on the hunt for the most perfect one– soft, warm, and a tangy cream cheese frosting. None of this clear glaze business. When I have a cinnamon roll, it better be loaded with delicious cream cheese. It’s so hard to get the good ones unless you go to an excellent bakery. So the other day when I knew a sweet friend of mine was having a birthday, I  had the perfect excuse to make cinnamon rolls my way. And that included a surprising addition of hazelnuts, because why not?

People, I am craving these again already, and I just made them last week. I woke up this morning and all I could think about was these delicious beauties. I have to make them again soon! I used to be so intimidated by making homemade breads and  pastries from scratch, but it really isn’t that hard if you have patience!

There is nothing like the sight of cream cheese frosting melting into a hot, fresh batch of cinnamon rolls. These are an adaptation of Nancy Fuller’s recipe. I changed them up by doing hazelnuts instead of pecans, and I put way less sugar in the frosting. I always find that I can cut over half of the sugar in most frosting recipes and it’s still quite sweet. I find that in particular the sweet brown-sugary filling in these cinnamon rolls calls for a tangier cream cheese frosting to balance it all out. And psst… You don’t have to have a standing mixer or dough hook to make these. You have to get your hands a little dirty and you get quite an arm workout in the process, but the payoff is totally worth it.

They certainly aren’t the most perfectly shaped cinnamon rolls. But that’s how you can tell that they are homemade and all the more amazing. The other thing I love about these is that you can keep the leftover rolls in the fridge, pop them in the microwave for 20-30 seconds when you want one, and they taste like they are hot out of the oven all over again. It’s absolutely glorious! 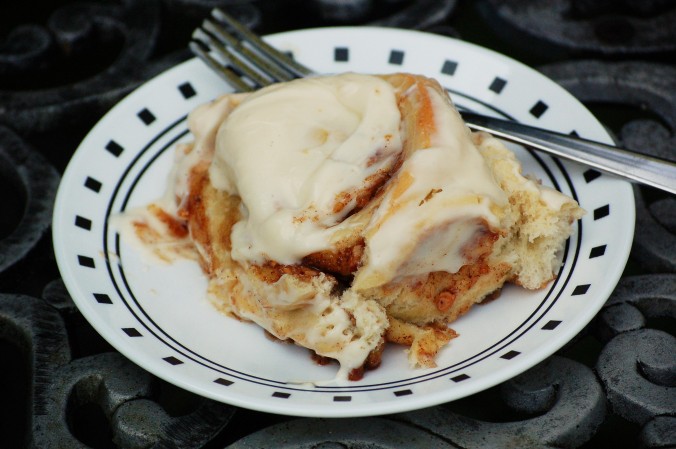 3 cups all-purpose flour, plus extra for dusting your work surface

2 Tabelspoons butter, melted, plus extra for greasing the baking dish

For the cream cheese frosting–